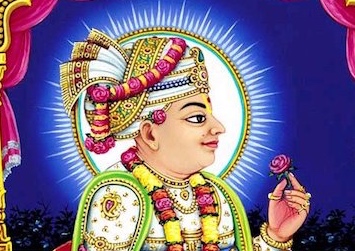 This section will briefly acquaint you with the Swaminarayan Sampraday, presenting an abridged biography of Shree Swaminarayan Bhagwan (Shreeji Maharaj). The easiest way to explain what Shreeji Maharaj achieved in such a short time-span would be to read the prose written by the great poet (Kavishwar) and staunch devotee Shree Nanalal Dalpatram.

Bhagwan Shree Swaminarayan was born in the Koshal region of India, in a village called Chhapaiya (near Ayodhya, UP). Having served His parents until their demise, the Almighty took to a pilgrimage of India, adopting the life of a nomadic hermit.

On completion of the 7 years’ sojourn of India, the Lord met up with Ramanand Swami, and established the purest and unadulterated form of religion, based on ultimate devotion to God only, with total observance of non-violent dharma. Shreeji Maharaj re-introduced the non-violent yagnas, on a grand scale. He instructed numerous acts of social welfare; alms-houses, digging of village wells / lakes, explained in detail why it is important to worship Satvic deities. Shreeji Maharaj discredited the act of enforced Sati & female infanticide.

After the passing of Shree Ramanand Swami, Shreeji Maharaj held a large gathering of the followers at the town of Faneni. It was during this sabha, whilst explaining that God is one, He is Narayan, He is our Swami, Shreeji Maharaj introduced ‘the father of all Mantras’, Swaminarayan. It should be noted that there was no Swami who He had appointed His successor or as an ideal devotee, at that time. The name refers wholly & solely to Bhagwan Purushottam Narayan (Shree Swaminarayan Bhagwan). The poet Dalpatram Kavi dedicates a whole chapter in his granth, ‘Shree Harileelamrut Sagar’, written on behalf of the Late Acharya Maharajshri Shri Vihaarilalji Maharaj (3rd Acharya on Vadtal Gadi), to the greatness of the name Swaminarayan

At Vadtal, Shreeji Maharaj established the dual Acharyaship, in direct succession to Himself. This He did by means of a legal document (known as Desh Vibhagno Lekh), which He dictated and got written by Shukanand Swami. Learned saints and elder satsangis witnessed this document. Copies were presented to Ayodhyaprasadji Maharaj & Raghuveerji Maharaj – these are currently in the possession of the current Acharyas.

At the age of 49 years, His work having been accomplished, Shreeji Maharaj left His physical body at Gadhpur, promising to remain within the Swaminarayan Sampraday in: 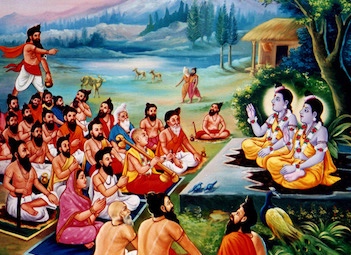 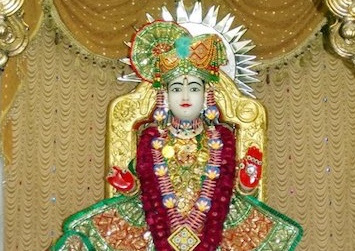